Transport of details in nest production 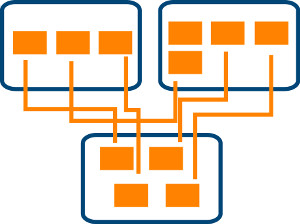 Production processes are characterized by a different course - it distinguishes among others stationary, stream and nest production Depending on the products produced, the company decides on a different type of process organization. In the following article we will focus on nest production.

Nest production is characterized by a variable course of work between different positions organized in nests, each of which may cooperate with each other, and the order of technological operations can be changed. This type of work organization is usually used in the case of mass production with high diversity of products and their variability. It enables concentration and optimal use of machines and devices, but its disadvantage is possible downtime between subsequent operations.

The ideal solution for eliminating the disadvantages of this production process is the implementation of AGV robots for automatic element transport. Thanks to this, the waiting time for the next operation is shorter and the task run time is short. AGV works allow for the implementation of autonomous traffic between designated points. The most modern way of navigation - laser navigation provides a lot of flexibility in determining and modifying the route of movement. For example, a robot can avoid obstacles appearing on its way using an alternative route.

An important issue in the case of the production process in question is the management of many entities. For efficient process management, it is worth using effective tools, such as SCADA software. It allows, among others automatically collect information from many machines and when, for example, a piece of work finishes or the pallet is loaded, the system automatically sends the AGV robot without operator intervention.

It is worth paying attention to the high level of occupational safety provided by the discussed robots. Robot moving in the factory space scans the area around, which allows him to react to objects located on the track and avoiding collisions. The scanned space is divided into several zones. As a result, the robot, when in motion, can react to difficulties by slowing or stopping - depending on the zone in which the obstacle is detected.

The use of an AGV robot in nest production shortens the waiting time for the next operation, facilitates the organization of work, and also lowers the course of the process and allows its continuity to be maintained. An additional advantage is the ease of modifying routes in the case of a paint-painted line and easy reprogramming of the robot's movement route due to intuitive software.

See all articles »Read also: How do robots navigate in the production and warehouse space?
×