Get ready for a gray rhino charge in VUCA times 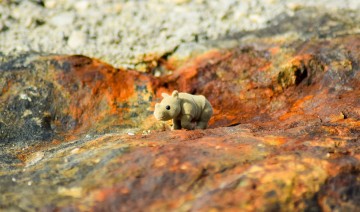 Today it will be about fashionable-sounding terms and how they relate to mobile robots and people.

The first word, actually the acronym you will find in many texts on the internet today is VUCA. Do you remember BUKA from Moomin? That's not it, although it sounds dangerous too. VUCA is the acronym for words:

V olatility, U ncertainity, C omplexity (complexity ) and A mbiguity (ambiguity). The term was used for the first time in 1987 to refer to the leadership theory of Warren Bennis and Burt Nanus, and was quickly popularized in military education in the United States. After the attack on the World Trade Center in 2001, the name gained wider application in business and strategic management. It is used to describe the uncertain, very variable and complex reality in which we operate.

The skeptic will immediately point out that this reality is not only the last 20 years during which the term became popular. We can successfully describe at least the last two centuries during which every decade brought rapid changes. So why the new name for a situation that is not entirely new? On the one hand, the introduction of a new name can give a sense of uniqueness to our time, because who does not want to feel special? On the other hand, it gives the impression of some control over the situation and an understanding of what is happening.

Here are two more fashionable terms, this time seemingly from the animal world. These are the black swan and gray rhino, but they do not apply to protected species, but rather specific phenomena with a high socio-economic impact.

The first term was popularized by Nassim Nicholas Taleb in his books " Black Swan. On the effects of unpredictable events "oraz"Anti-motion. About the things that are shaken." He called such phenomena with a very low probability, which in the event of their occurrence can have very negative consequences (e.g. death of a dictator, meteorite hitting the ground or terrorist attack).

Gray rhino is the concept of Michele Wucker introduced at the World Economic Forum in Davos in January 2013. In some opposition to the black swan, it means dangerous events with a fairly high probability, the risk of which, however, is ignored, we forget that they can happen.

Such phenomena include overheating China's real estate market or epidemics. Why? In our recent history we have already dealt with epidemics and the matter of time was (at least according to epidemiologists) the emergence of a new virus. The globalization factor, the way people and goods move, and the network of economic connections have influenced the dynamics of the virus spreading around the world and its impact on various industries.

Let's return to strategic management in uncertain times. It is worth asking yourself, how have our organizations prepared / can prepare for such an event ?

Proposed answer is Bob Johansen, author of the book Leaders Make the Future: Ten New Leadership Skills for an Uncertain World. He suggests redefining the words acronym VUCA for Vision, Understanding, Clarity and Agility. What does it mean? In a nutshell, leaders and organizations should have and be guided in their action by a vision that will allow them to survive in difficult times. Understanding and good communication will facilitate the implementation of the vision. Transparent and well-organized processes will allow you to make the right decisions, and agility will allow you to easily adapt your organization and carry out changes.

How does VUCA relate to robots and people?

Following Johansen's thoughts, the organization and the people who create it should build competences that allow for the most effective operation even when everything is falling on its head.

A creative team with broad competences, equipped with tools that increase flexibility and mobility will allow quick adaptation to new circumstances.

To be agile, it is also worth investing in technologies that are characterized by flexibility, versatility and ease of implementation. An example would be just autonomous mobile robots > , such as MOBOT ®. This solution, which thanks to LMS laser navigation, is quick to implement and does not require changes in the factory space, it is also easy to reconfigure it to changing needs.

The universal, agile design allows for simple and quick adaptation to tasks by replacing modules for the superstructure / carts transported by the robot. This means that when the type of product manufactured changes, it is enough to replace e.g. a module with automatic rollers for a module adapted to transport pallets, without having to replace the entire device or part of the production line.

What's more, the universal design of mobile robots allows their easy implementation in a variety of industries, not only in industry, warehouse, but also in laboratories or other places where there are repetitive internal circulation processes loads.

Another aspect is good communication, a feature that characterizes MOBOT ®. They communicate with each other and with the management terminal via Wi-Fi. Several robots can be integrated into a network cooperating with the enterprise's ERP / SCADA system, giving precise information about work and tasks performed. Such data allows for adequate matching of their work with the demand of given production stations. Thanks to this it is possible to optimize the use of resources - it is known exactly how much, where and when there is a demand for a given raw material, which machines and when they are operated, and when they could be better used.

Agility is also scalability of the robot system. This solution can be expanded as needed and adapted to the development of the organization.

Johansen's proposal is perception change as both a threat and an opportunity. It is worth looking far beyond the distant horizon of events and consider where the next charge of the gray rhinoceros may come from, and then prepare accordingly.