AGV robot in a danger zone for a human 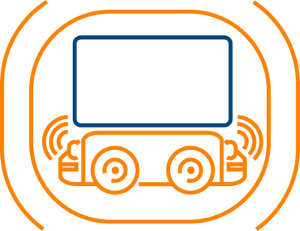 An industrial robot, like any machine in direct contact with man, poses a threat to him. For this reason, each position must be equipped with an appropriate security system, ensuring total supervision over its work.

In spite of this, especially in the case of robotic stations, there are dangerous areas for people who require a complete stoppage of the machine to ensure access. This is not a problem in case of maintenance or retooling of the robot, but what solution will be used when the production process requires picking up elements in such a zone? The answer is varied transport systems, enabling the robot to remove items, e.g. on a tape. However, if there is a need to transport between distant positions, a more efficient solution is the implementation of mobile robots. The WObit company proposes the use of MOBOT® AGV robots, which can receive details from robots and transport them for further processing, or take packaging from a palletizing robot and transport it, for example to the warehouse.

MOBOT® AGV enables the implementation of autonomous traffic between designated points. The robot's movement route depending on the model can be determined using three navigation methods:

Transport of elements can take place both on the body of the device and in a separate trailer. Depending on the robot model, the transported mass can be> 100 to 1500 kg on a flat surface. What's important, thanks to the unique design of robots, you can easily convert your robot to another type of load by simply changing the truck in an automatic way.

Why robots are safe?

Their components, such as circuit breakers, relays, etc. comply with the SIL2 safety standard. The robots are equipped with redundant elements, with the option of monitoring their status. Robots from the MOBOT® AGV family also have laser scanners with configurable security zones. For optimal work, robots have been limited to three ranges: the farthest zone in which the robot slows down, the warning zone, where it further slows down its traffic and sending light and sound messages, and the safe zone in which the entire stop is carried out its movement. Event and sound signals are also notified of any events.

Threats are not terrible to robots

AGV vehicles can work in conditions dangerous for people or negatively affect their performance such as high temperatures, high dustiness, etc.

Hand trucks are safer than forklifts, requiring a driver. When it is tired, sick, it can easily turn its attention or cause the delay of the department. Then it is not difficult to find an accident. By replacing employees with off-road trucks, the likelihood of errors being made by them is also limited.

In addition, automated transport can be centrally managed with greater efficiency.

The use of the AGV robot shortens the waiting time for the next operation, facilitates the organization of work, and also lowers the course of the production process and allows the preservation of its continuity. An additional advantage is the ease of modifying the robot's movement routes thanks to intuitive software.

See all articles »Read also: Get ready for a gray rhino charge in VUCA times
×