Where are mobile robots used? 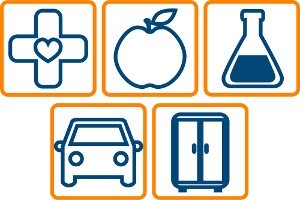 The short answer to this question was: almost everywhere, because mobile robots for automatic internal transport are extremely universal solutions.

Why are they so versatile?

First of all, thanks to their compact dimensions, can even fit in narrow places. They can move in the same space as people thanks to an advanced security system.

In the case of systems orientated on the basis of laser navigation, you do not need any additional markings in space, because the sensors in which they are equipped allow for a very precise location.

Thanks to battery power, these robots can work virtually without interruption.

What is important, they can be used in environments where hygienic-sanitary, microbiological or temperature conditions do not ensure full protection of the operator. This also applies to the so-called clean rooms and spaces dangerous for people, due to working manipulators or other industrial robots.

The aforementioned factors make the possible range of mobile robots usage very wide. So let's go to the examples:

The majority of mobile transport robots are used in the broadly understood industry. The origins are related to the automotive industry , which quickly integrates all technological improvements, such as robotics and process digitization. The first AGV trucks were already deployed in the 1960s. Currently, it is one of the areas that implements the most modern mobile robots. They are usually used to supply production sockets and receive half-finished products or finished products such as tires or engines.

Self-propelled transport works also work in areas such as furniture production, where both small details such as screws and finished products can lead. The branch of fast tradable goods (abbreviated as FMCG) also implements more and more mobile robots to connect production nests and supply them with raw materials. Another example is the electronics, housing and laboratories.

In addition to the transport of goods and raw materials, the mobile robot can also be used to carry a robotic arm, especially a collaborative robot. As a result, we gain the advantages of the mobile robot's versatility and flexibility as a secure robotic arm. Such a team of robots allows downloading a wider range of product types, as well as performing activities supporting human activity or quality control.

Warehouse logistics, which applies to both logistics centers and warehouses of manufacturing companies, is increasingly looking to support processes using AGV. Mobile robots help, among others in the automation of unloading and order picking.

In addition to the strictly industrial processes, hospitals are equally interesting and developing, where robots supply meals and bed linen, and collect waste. They can be successfully used at airports for transporting luggage and as a mobile guide.

Mobile robots have a huge potential and you, what was the use of self-propelled transport works?